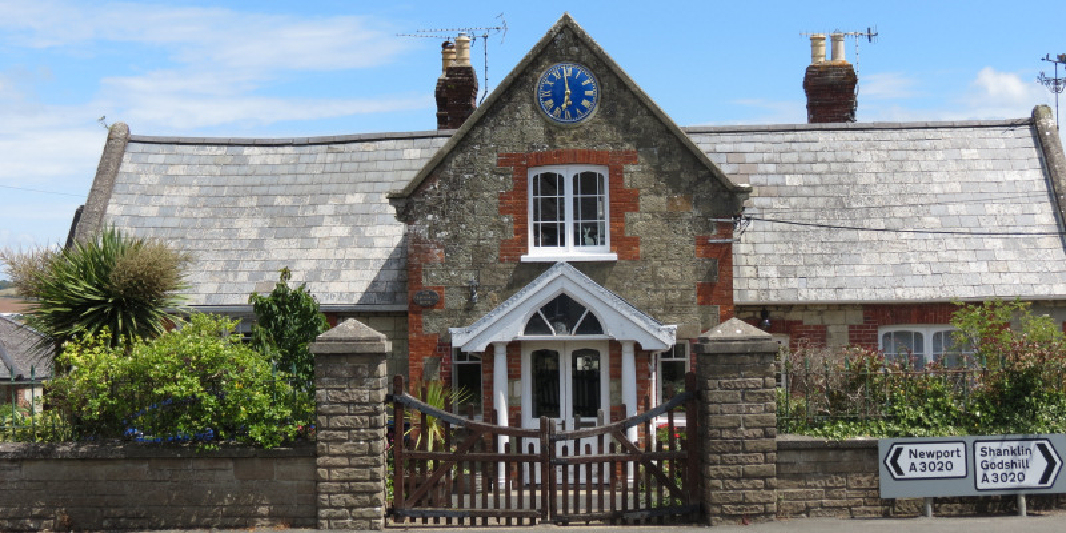 Southern Vectis timetables list Rookley School as a bus stop but there has not been a school on this site since 1958 when the last pupils vacated the premises. Since then the buildings have been kept in good order and recently the current owner spent much time, effort and money in an attempt to get the village clock back to its former glory.
The school was built in the mid eighteen hundreds at the sole expense of a local benefactor, Richard Woodward owner of the thriving Rookley Brickyard. He not only financed the building but also paid for the staff wages. In 1870 a public meeting was called by the local vicars when a decision was needed about the future financing of the Rookley and Arreton Schools. An appeal for Annual subscriptions followed and in due course a "Voluntary Scheme" was adopted that brought a Government Grant and which gave the local Authority more power.
The first inspectors visited the school in 1892. Little is reported about the education facilities, but unsurprisingly, the sanitary arrangements were deemed unsatisfactory. The inspector felt that the existing bucket system could not cope with the sixty odd pupils needs. The toilet facilities remained a problem for years.
The school carried on caring for the needs of Rookley Children for the next fifty years and is remembered with affection by those who spent formative years there.
Falling numbers, problems with school meals, and leaks in the building led to the decision to close the school. Mrs. Metson the headteacher took early retirement and staff and pupils were resettled in other local schools.

Over the years the premises have had a variety of occupiers but the imposing façade and the playground railings bear witness to its former function.
Editor's Note:
So that the pupils who were to transfer to Chillerton School had some continuity, the last headmaster of Rookley School was the man who would take over headship of Chillerton School the following term - Rob Marshall - my dad.

Return to the blog page